Vancouver, British Columbia – BeMetals Corp. (TSXV: BMET, OTCQB: BMTLF, Frankfurt: 1OI.F) (the “Company” or “BeMetals”) is pleased to announce the results of a technical report (the “report”) for its wholly owned Kato Project (“Kato” or the “Project”) in Japan. This report represents the first formal technical compilation and target generation report for the Project and is based upon geological work conducted by the Metals and Mining Agency of Japan (“MMAJ”) in the 1990s, and subsequent drilling between 2018-2020 by Kazan Resources prior to being acquired in April 2021 by BeMetals.

These drill results are historical in nature. The main mineralized zone has only been completely crossed by three widely-spaced holes so the orientation and true thickness of the mineralized zone is currently not known. A nominal cut-off grade of 0.5 g/t Au has been applied to determine the boundaries of the intersections. * Drill hole ended in mineralization. See Table 3 below and QA/QC section for more information.

John Wilton, President and CEO of BeMetals stated, “This month we are pleased to have completed the first formal technical report for our Kato Gold Project in Japan which has included field validations and related drill core review. The field inspections were conducted this year. The four high priority drill targets generated from this work are very exciting and include strong geological motivation for confirmation and extensions to the high-grade, main zone, intersected by MMAJ’s historical drilling. The historical drilling also indicates broader lower-grade gold intercepts with alteration zones surrounding the high-grade veins. Table 1 above indicates selected intersections of both styles of gold mineralization.

The Kato Project is the most advanced of our five compelling gold exploration properties in the prospective Japanese epithermal gold terrane. The Kato mineralization is considered an example of a low-sulphidation epithermal system. Examples of deposits formed from this style of gold mineralization would include the world famous Hishikari Gold Mine in Kyushu, as the largest in Japan. The Julietta and Kupol deposits in Eastern Russia are also examples of this style of deposit and both projects were originally mined and or developed by Bema Gold Corp. Table 2 below provides more details of these and other examples, with a representative range of scale and grades for this deposit type.”

Mr. Tom Garagan, a BeMetals founding Director, and formerly Vice President of Exploration at Bema Gold Corp., commented, “The Kato Project was selected for its compelling geology and prospectivity with historic high-grade drill intersections within a large structurally prepared terrane.  Japan has seen little exploration in recent decades and offers the potential for significant discoveries. Although at an earlier stage, Kato has similar geology to Bema Gold’s historical Julietta Mine that we explored, developed and operated in the Russian Far East.”

Mr. Wilton continued, “As a result of the extensive clay and other alteration minerals developed around the high-grade zones at Kato, which are encouraging from an overall gold mineralization potential point of view, intersecting the main target units has proved challenging in historic drilling. To address this, the Company has revised the specifications of appropriate drilling equipment and drill hole design, including the planned use of improved drill muds and a cleaning system that should enhance drilling efficiency.”

The following Table 2 illustrates some examples of gold deposits around the world, which appear to exist in an analogous geological environment as the Kato Project.

Table 2.  Global Examples of Low-Sulphidation Epithermal Deposits with Ranges of Tonnage and Grades

The Project is situated in a rural setting near the centre of Hokkaido, directly northwest of the town of Kamishihoro (population 4,900) and 40 kilometres north of the city of Obihiro (population 169,000). (See Figure 1). The Kato Project (historically referred to as the Seta River Prospect) is an example of a remarkably well-preserved low sulphidation epithermal gold occurrence.  Outcropping of clay-altered and weakly-mineralized lake-bed sediments are evidence of a high-temperature steam-heated zone above a hydrothermal plumbing system. This mineralization style identified to date is considered an example of a low-sulphidation epithermal system. The classic example of this mineralization type in Japan is the Hishikari mine, on the island of Kyushu.  Global examples of this type of mineralization include Lihir (Papua New Guinea), Kupol and Julietta (Russia), Waihi (New Zealand) and Masbate (Philippines), (See Table 2).

The 1990s MMAJ drilling at Kato identified a zone of higher-grade gold mineralization over approximately 170 metres of strike with an additional kilometre of potentially-favorable geology largely untested by drilling to the southeast.  The gold-bearing zone is hosted in quartz–adularia vein and breccia, and occurs at depths that range from around 50–225 metres below surface (See Figure 2 and Table 1). Table 3 includes the complete set of historical drill intersection results for the Kato Project.

The priority drill target remains to intersect the quartz–adularia vein zone that hosts higher gold grades, and verify the grades reported in the MMAJ reports.  The drilling plan will also seek to step out to the southeast along strike in a potential area of extension to the quartz–adularia vein zone and hydrothermal breccia zones that lack sufficient investigation.  In addition, BeMetals plans to drill-test a sinter target in the southern extension area of the Project. The locations of the four proposed drill holes are shown in Figure 3.

Figure 1: Location of Kato Gold Project and Other BeMetals Exploration Projects in Japan 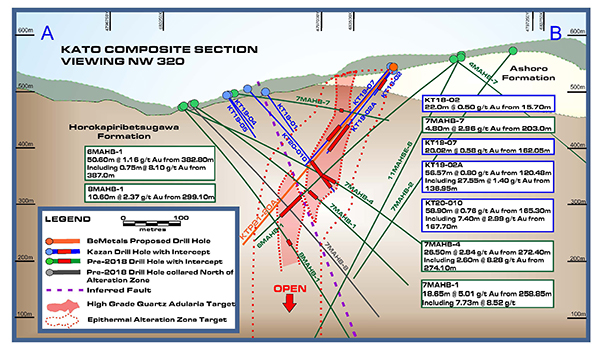 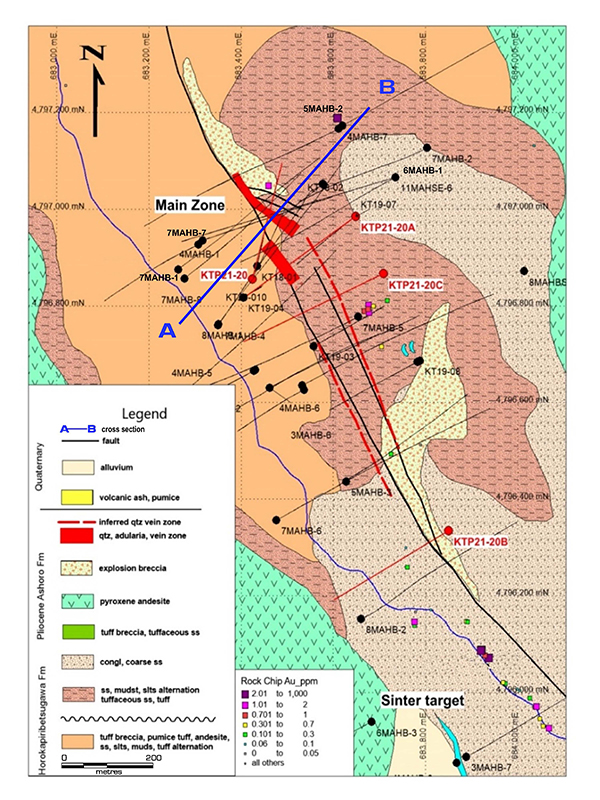 These drill results are historical in nature. MAHB series drill holes completed by MMAJ and KT series drill holes completed by Kazan Resources. BeMetals has not undertaken any independent investigation of the sampling nor has it independently analyzed the results of the historical exploration work in order to verify the results. BeMetals considers these historical drill results relevant as the Company will use these data as a guide to plan future exploration programs. The Company also considers the data to be reliable for these purposes however the Company's future exploration work will include verification of the data through drilling. *Drill hole ended in mineralization. The main mineralized zone has only been completely crossed by three widely-spaced holes so the orientation and true thickness of the mineralized zone is currently not known. A nominal cut-off grade of 0.5 g/t Au has been applied to determine the boundaries of the intersections.

The Qualified Persons preparing the technical report are Mr Tom Garagan, P.Geo., and Mr. Luke Viljoen, Pr. Sci. Nat.  The report will be filed with SEDAR and posted on the Company’s website.