VANCOUVER, CANADA - BeMetals Corp. (“BeMetals” or the “Company”) (TSXV: BMET) is pleased to announce that encouraging results have been returned from its Phase 1 aircore drilling program providing several copper anomalies below Kalahari sand cover units at the Pangeni Copper Exploration Project (“Pangeni Project”) in Zambia. A Phase 2 aircore program is already underway and will include infill aircore drilling of priority targets generated from Phase 1 drilling, and the initial testing of other compelling regional targets on the Pangeni property. The infill aircore drilling should improve definition of the current priority copper anomalies returned in Phase 1 for further exploration testing in the 2019 field season. The Phase 1 aircore results indicate both the efficient nature of the exploration approach to testing of the Pangeni Project and the thin to moderate (average approximately 25 metres) thickness of the Kalahari cover units. This program has importantly identified significant copper anomalies below the cover units within a previously largely untested region of potential extensions to the Zambian Copperbelt.

John Wilton, President, CEO and Director of BeMetals said, “We are encouraged by the results from the Phase 1 aircore drilling program at the Pangeni Project where the Company is targeting tier one scale copper deposits. Consecutive 200 metre spaced aircore boreholes E2-3, E2-4 and E2-5 returned individual one metre samples of 537, 452, and 1,028 parts per million (“ppm”) copper respectively on line E2. These copper results are based upon strict aircore sampling protocol and determined using a Desktop XRF analyser (“pXRF”) in a field facility (see Table 1 for complete Line E2 results and QA/QC description below). For the Phase 1 program to have returned these results supports the prospective nature of the property and the applied target selection. The Pangeni Project benefits significantly from strong technical and local Optionors, Copper Cross Zambia Limited and Pangeni Mineral Resources Limited that have allowed for efficient money-in-the-ground focused deployment of expenditures.”

The Phase 1 aircore program was completed through 67 boreholes totalling 1,891metres of drilling. All the planned Phase 1 targets were tested utilising less metres of drilling than anticipated due to thinner than expected Kalahari cover. Approximately 82% of the boreholes returned representative samples from bedrock or weathered bedrock with the remainder interpreted to be of sampled basal portions of the Kalahari sequence. Good success was made in penetrating various hard ferricrete layers in some areas of the Kalahari sequence and a total of 617 samples were analysed by pXRF from the Phase 1 program.

The operation and results from the Phase 1 aircore program have confirmed the applicability of this drilling technique to return representative base of Kalahari, saprolite, and weathered bed rock information within the Pangeni Project. All the Phase 1 aircore boreholes have been drilled with 200 metre spacing along the exploration lines.

Figure 1 below illustrates the location of the Phase 1 aircore lines (Lines A-E) and individual boreholes indicating the range of maximum values for copper sampled in each hole. The sampling protocol required a minimum of five samples per borehole representing, generally, 2 metres from the base of the Kalahari, and 3 metres into saprolite and/or weathered bedrock where possible. Representative material from each sampled metre was dried, screened to 180 micron, bagged and transported to a field camp where they were analysed using the InnovX Systems X5000 Desktop XRF analyser (“pXRF”). Strict sampling protocol was observed throughout the pXRF analysis to include; equipment calibration, systematic use of certified reference material, blank standards, and field duplicates (see details below in QA/QC section). 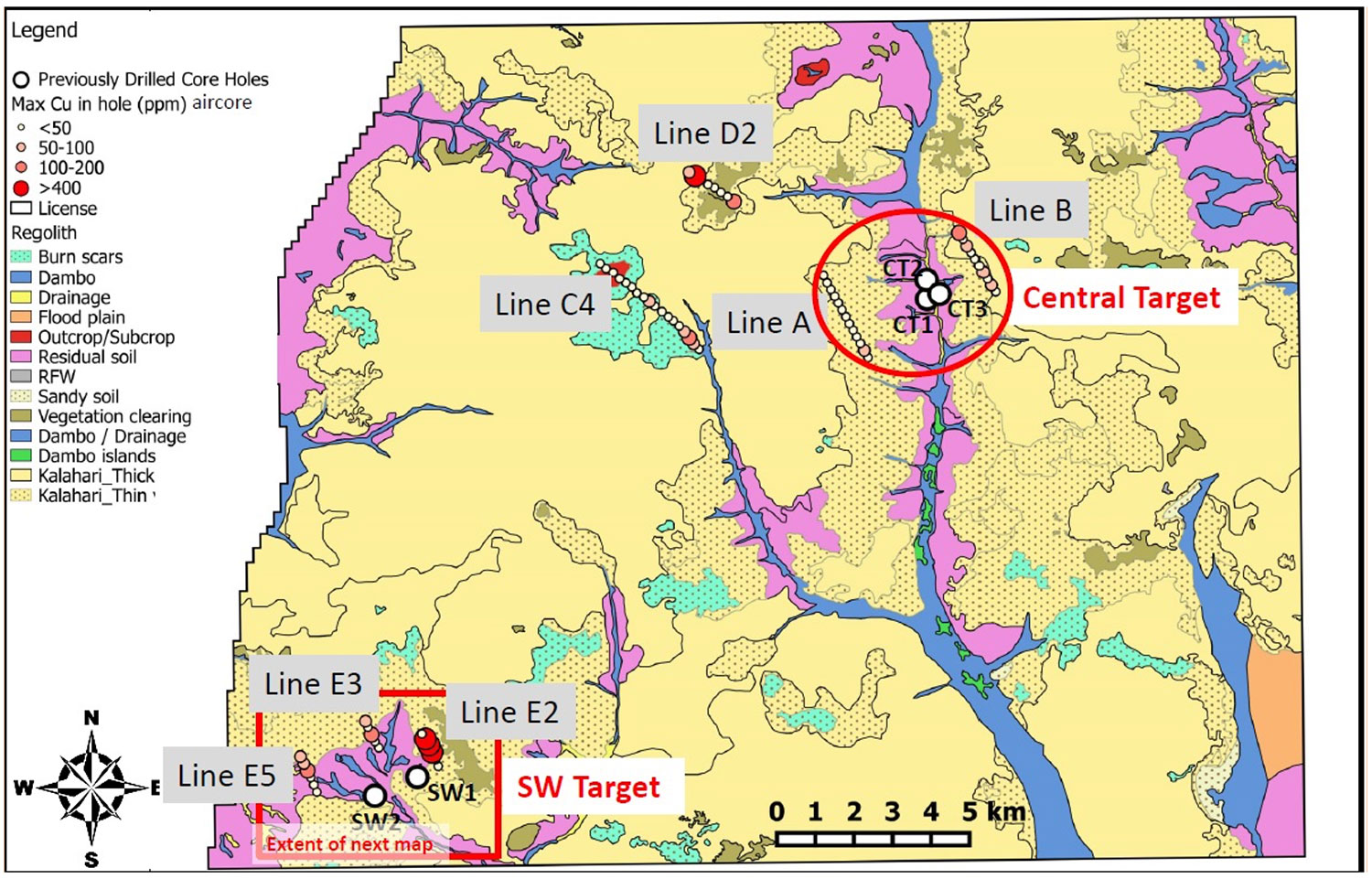 Initial interpretation of the results indicate priority anomalies returned on line D2 in the northern sector of the licence, and line E2 some 600 metres northeast of the SW Target, where the only previous drilling on the property in 2016, returned 5.5 metres at 0.48%TCu (from 142.5 metres depth) in core borehole SW1.

Figure 2 below shows the range of copper values returned from aircore lines E2, E3, and E5. Line E2 has returned encouraging copper results in boreholes E2-3, E2-4, and E2-5. The ranges of results from this line are from 3 ppm to 1,028 ppm copper. Aircore boreholes E2-3, E2-4 and E2-5 returned 537, 452, and 1,028 ppm copper respectively (see Table 1). These anomalous base of Kalahari and weathered bedrock copper results provide a compelling, significant, target for further exploration 600 metres to the northeast of the mineralized intersection in borehole SW1. It also further demonstrates the potential of other, largely unexplored, compelling geological targets within the licence, covered by a thin veneer of Kalahari sands. 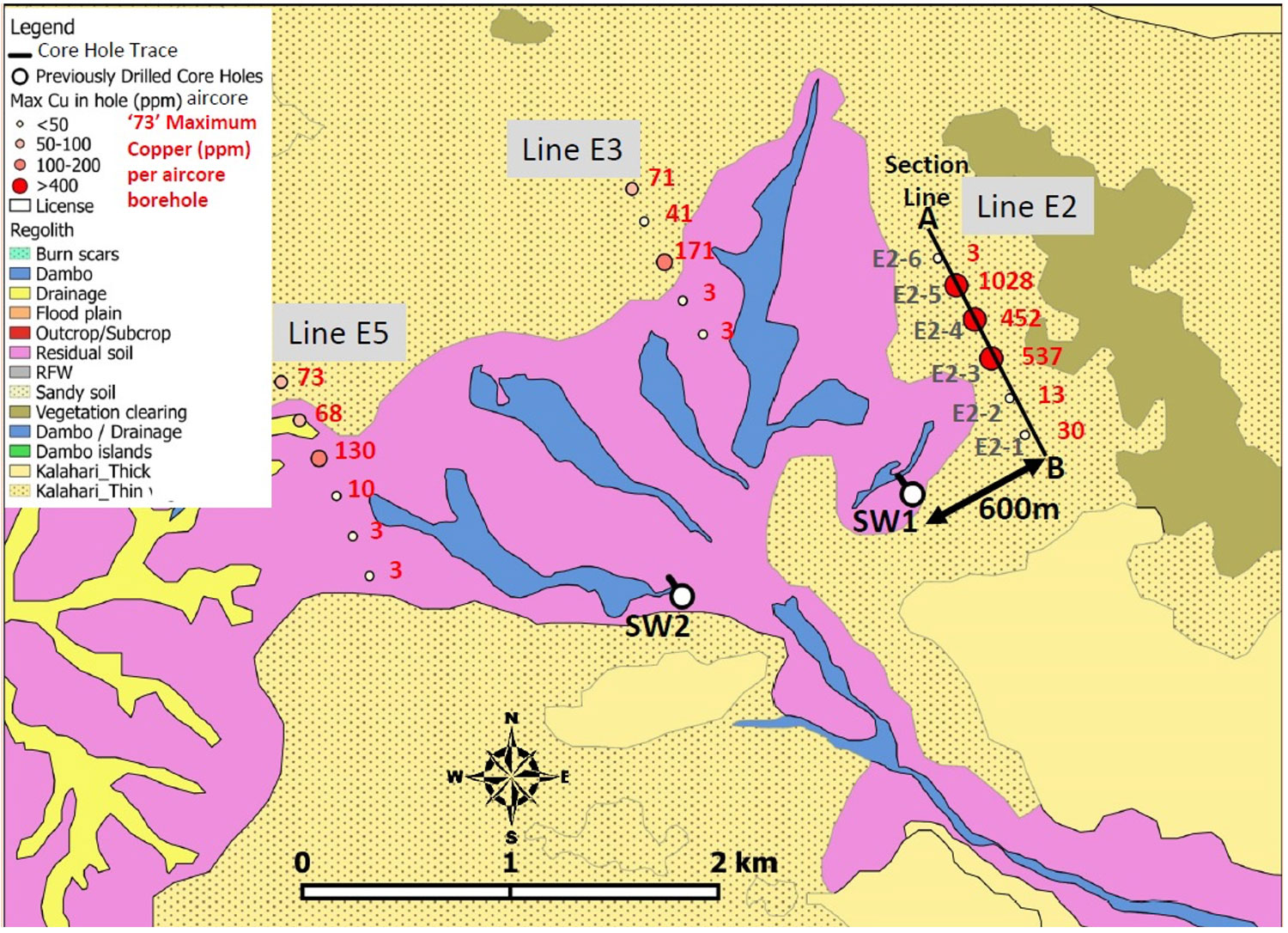 Figure 3 below indicates an interpreted cross section through line E2 showing the thickness of Kalahari cover intersected, and range of copper values sampled generally in the lower 5 metres for each borehole, with borehole E2-3 being sampled from surface for better regolith data (see Table 1). These copper results motivate infill aircore drilling on Line E2 to further define the potential exploration follow-up and core drill targets at this prospect during the 2019 field season. 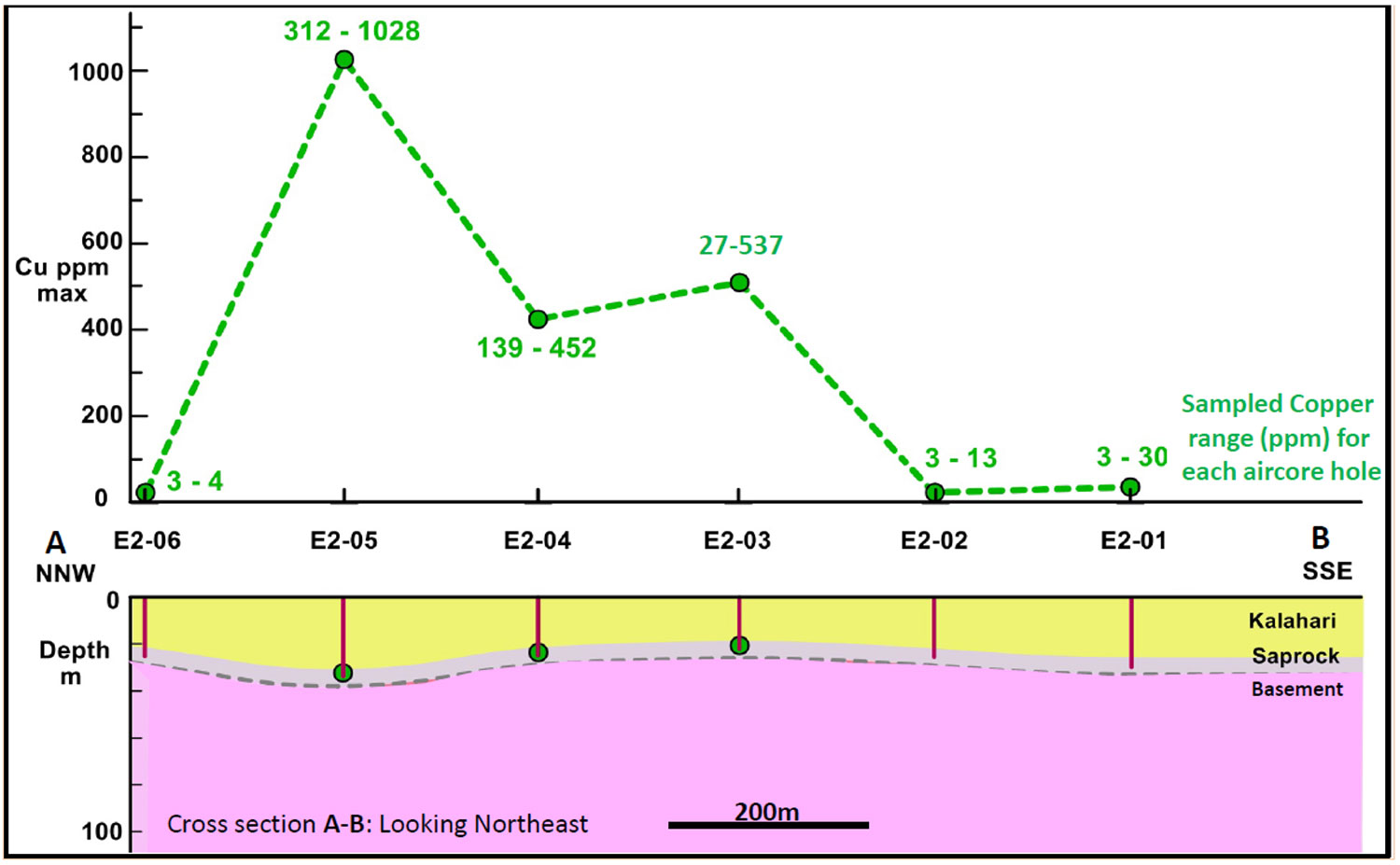 The Phase 1 aircore program indicates the efficient nature of this exploration approach to the testing of the Pangeni Project, the thin to moderate thickness of the Kalahari cover units, and the critical identification of copper anomalies below the cover units.

The Pangeni Project is located on the western extension of the Zambian Copperbelt, within the Lufilian Arc, underlain by Katangan Supergroup metasediments which are covered by a thin veneer of Kalahari sands.  The Sentinel, open pit, Copper Mine is operated by First Quantum Minerals some 130 kilometres to the northeast of the Pangeni Copper Exploration Project. A number of major international mining companies have identified this region of the Zambian Copperbelt to be prospective for the discovery of tier one copper mines and are conducting exploration field work in this region.

Field operations and management have been provided by Remote Exploration Services (“RES”) an independent geological consulting and contracting company. The aircore drilling was conducted by Blurock Mining Services, of Kitwe, Zambia.

RES conduct all aspects of the field operations in-line with their standard operating procedures. The sampling protocol required a minimum of 5 samples were collected per borehole representing, generally, 2m from the base of the Kalahari, and 3m into saprolite (after bedrock) and/or weathered bedrock where possible. One borehole per line was selected and each metre from surface to end of hole was sampled. Representative material from each sampled metre was dried, screened to 180 micron, bagged and transported to a field camp where they were analysed using the InnovX Systems X5000 Desktop XRF analyser (“pXRF”). Strict sampling protocol was observed throughout the pXRF analysis to include; equipment calibration, regular use of certified reference material, blank standards, and field duplicates. After homogenisation 100g sample of minus 180 micron material was used for the pXRF determinations. Field duplicates were collected at a 5% frequency (1 in every 20 samples) and inserted into the sampling chain. At the start of the daily analyses, the XRF machine was switched on and a calibration check procedure was performed as per manufacture manual. The calibration was completed by placing the stainless steel 316 disk over the analyser window. The calibration check button was pressed and the test lasted for 15 seconds. After the calibration, a selection of Certified Reference Material (CRM) and the blank was analysed 5 times each to check for the consistency and accuracy of the machine. A series of standards were analysed at a ratio of 1:20 (every 20th sample) to determine the accuracy of the dataset. In addition, one standard was analysed 5 times consecutively at mid-day or half way through the daily analysis. A blank standard/ silica powder was analysed at a ratio of 1:10 (every 10th sample) to test for possible contamination of the analyser window during the analyses. Samples with Cu values of >100pm were analysed twice to check the repeatability of the value obtained during the analysis. At the end of each day, the results were exported from the machine and QA/QC carried out on the dataset batch to determine if any repeat analyses were required where QA/QC failed. The Cu, Pb and Zn values of all standards were plotted versus time to test repeatability and monitor for temporal instrument drift. Upon completion of the Phase 2 aircore program a representative suite of samples will be dispatched to an internationally accredited independent laboratory for check analysis and to scan for other potentially useful pathfinder elements.

BeMetals is new base metals mining company focused on becoming a significant base metal producer through the acquisition of quality exploration, development and production stage base metals projects. Our growth strategy is led by a strong Board of Directors, key members of which have an extensive, proven track record in delivering considerable value in the mining sector through the discovery, construction and operation of mines around the world. The Board, its Advisors, and senior management also provide outstanding deal flow of projects to BeMetals based upon an extensive international minerals business, exploration and mining network of contacts.

Venture Exchange) accepts responsibility for the adequacy or accuracy of this release.

This news release contains "forward-looking statements" and “forward looking information” (as defined under applicable securities laws), based on management’s best estimates, assumptions and current expectations. Such statements include but are not limited to, statements with respect to the plans for future exploration and development of the Pangeni Project and the acquisition of additional base metal projects.  Generally, these forward-looking statements can be identified by the use of forward-looking terminology such as "expects", "expected", "budgeted", "forecasts" , "anticipates" "plans", "anticipates", "believes", "intends", "estimates", "projects", "aims", "potential", "goal", "objective", "prospective", and similar expressions, or that events or conditions "will", "would", "may", "can", "could" or "should" occur.  These statements should not be read as guarantees of future performance or results.  Such statements involve known and unknown risks, uncertainties and other factors that may cause actual results, performance or achievements to be materially different from those expressed or implied by such statements, including but not limited to: risks related to the Pangeni Project; risks related to international operations; risks related to general economic conditions, actual results of current exploration activities, unanticipated reclamation expenses; changes in project parameters as plans continue to be refined; fluctuations in prices of metals including copper and other base metals; fluctuations in foreign currency exchange rates, increases in market prices of mining consumables, possible variations in resource estimates, grade or recovery rates; failure of plant, equipment or processes to operate as anticipated; accidents, labour disputes, title disputes, claims and limitations on insurance coverage and other risks of the mining industry; delays in the completion of exploration, development or construction activities, changes in national and local government regulation of mining operations, tax rules and regulations, and political and economic developments in countries in which the Company operates. Although the Company has attempted to identify important factors that could cause actual results to differ materially from those contained in forward-looking statements, there may be other factors that cause results not to be as anticipated, estimated or intended. There can be no assurance that such statements will prove to be accurate, as actual results and future events could differ materially from those anticipated in such statements. The forward-looking statements and forward looking information are made as of the date hereof and are qualified in their entirety by this cautionary statement.  The Company disclaims any obligation to revise or update any such factors or to publicly announce the result of any revisions to any forward-looking statements or forward looking information contained herein to reflect future results, events or developments, except as require by law. Accordingly, readers should not place undue reliance on forward-looking statements and information. Please refer to the Company’s most recent filings under its profile at www.sedar.com for further information respecting the risks affecting the Company and its business.