VANCOUVER, CANADA - BeMetals Corp. (“BeMetals” or the “Company”) (TSXV: BMET) is pleased to announce that further encouraging results have been returned from its Phase 2 aircore drilling program at the Pangeni Copper Exploration Project (“Pangeni Project”) in Zambia.

This program included both the 100-metre spaced infill aircore drilling of priority targets generated from Phase 1 drilling, and the initial testing of other priority regional targets on the Pangeni property. The Phase 2 program has generated a new target, H1, that is located in a compelling geological setting below the thin Kalahari sand, near the contact between basement units and interpreted Katangan stratigraphy (See figures 1 & 2 below). This geological setting is known to host many of the significant copper deposits in the world class Zambian Copperbelt.

The Phase 2 results have also returned the highest tenor copper sample from the aircore programs to date on the property, with a one metre sample of 1,268 parts per million (“ppm”) copper in borehole D2-09 (See Figures 1 & 2 below). This sample is at a depth of 27 metres, some 3 metres below the Kalahari sand, and is supported by a sample at 26 metres depth of 943 ppm copper in the same borehole. This 100 metre infill borehole followed up a 586 ppm copper anomaly returned in borehole D2-07 from the 200-metre spaced Phase 1 program.

John Wilton, President, CEO and Director of BeMetals said, “The Pangeni Project continues to deliver robust exploration results indicating the potential for the discovery of significant copper mineralization on the property. The Company, with its strong technical and local Optionees on this project, Copper Cross Zambia and Pangeni Mineral Resources Limited, has designed and implemented its exploration work with the objective to identify tier one scale deposits.”

The new compelling H1 target, and other defined anomalies from the combined Phase 1 & 2 programs will be further tested at the start of the 2019 field season. The interpreted geological setting of the H1 copper anomaly, in particular, represents a high priority target for the project along with the D2 and SW targets. These copper results are based upon a strict aircore drilling sampling protocol and determined using a Desktop XRF analyser (“pXRF”) in a field facility. On January 10, 2019, an independent laboratory, Intertek Genalysis of Australia, provided results from a representative set of 93 samples from both the Phase 1 & 2 aircore programs. These results compare favourably with the pXRF determinations.  The combined results of the Phase 1 & 2 aircore programs have demonstrated the prospectivity of the Pangeni Project and value of efficient money-in-the-ground focused deployment of exploration funds.”

The completed Phase 2 aircore program included 46 boreholes for 1,891 metres of drilling. The thickness of the Kalahari cover unit varied as anticipated between the F1, F2 and G2 lines that average some 49 metres, whereas the H1, D2 and E2 lines averaged overall some 25 metres of cover (See figure 1 below). This work has importantly defined targets within a previously largely untested region of potential extensions to the Zambian Copperbelt.

Figure 1 below shows the location of the Phase 2 aircore on lines D2, E2, F1, F2, G2 and H1 with individual boreholes indicating the range of maximum values for copper sampled in each hole illustrated in blue symbols. The Phase 2 aircore drilling included 100-metre spaced infill drilling centres on lines D2 and E2 with 200-metre spaced reconnaissance exploration drilling on lines F1, F2, G2 and H1. In general, good success was made in penetrating various hard ferricrete layers found in some areas of the Kalahari sequence, and a total of 421 samples were analysed by pXRF from the Phase 2 program. These representative samples were collected predominately from the base of Kalahari, saprolite, and weathered bedrock areas of the regolith.

The H1 target is identified by aircore boreholes H1-5 and H1-07 that returned 586 ppm and 290 ppm copper respectively. The thickness of Kalahari cover on this line ranged from 9 to 57 metres with an average of some 26 metres.

Field sampling required a minimum of five samples per borehole representing, generally, 2 metres from the base of the Kalahari sand, and 3 metres into saprolite and/or weathered bedrock where taken when possible. Strict sampling protocol was observed throughout the pXRF analysis to include; equipment calibration, systematic use of certified reference material, blank standards, and field duplicates (see details below in QA/QC section). 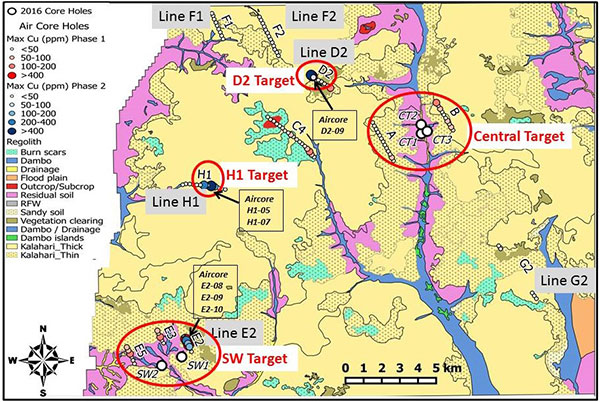 Figure 2 below shows the range of copper values returned from Phase 2 aircore lines in blue symbols, plotted on a geological map based upon the interpretation of aeromagnetic data acquired over the property. Of specific interest is the understood favourable geological setting of the H1 target at the contact between basement units and the northwestern thrust domain, in close proximity to potential Katangan host units. A number of significant copper mines throughout the Zambian Copperbelt are known to be located in such geological situations.

The improved definition of the Line E2 anomaly some 600 metres northeast of the SW Target, where previous core drilling on the property in 2016, returned 5.5 metres at 0.48% copper (from 142.5 metres depth) in core borehole SW1 remains a priority target for the 2019 exploration program (See figure 2). 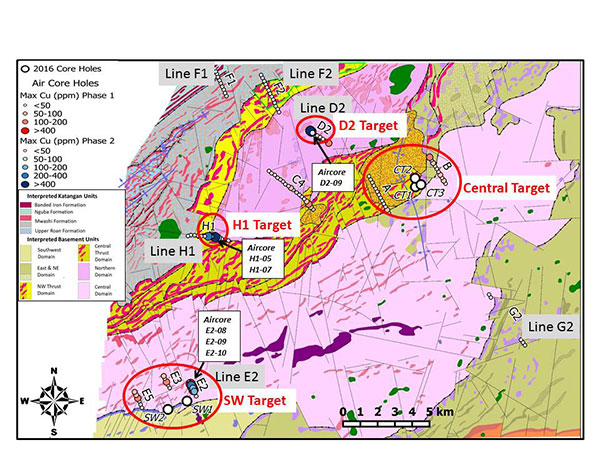 The combined Phase 1 & 2 aircore program show the efficient nature of this exploration approach to the initial testing of the Pangeni Project, the thin to moderate thickness of the Kalahari cover units, and the critical identification of copper anomalies below the cover units. The next phase of exploration work will include aircore infill drilling to define current 200-metre spaced targets from Phase 2 (H1 Target) along with core drill testing of the priority H1, SW and D2 targets.

On January 10, 2019, an independent laboratory, Intertek Genalysis of Australia, provided results from a representative set of 93 samples from both the Phase 1 & 2 aircore programs. These results were determined using multi-acid, near total digest, and analysed by Inductively Coupled Plasma (“ICP”) Optical (Atomic) Emission Spectrometry (“OES”). They compare favourably with the pXRF results and support the vigorous sampling protocol implemented for the field operations.

The Pangeni Project is located on the western extension of the Zambian Copperbelt, within the Lufilian Arc, underlain by Katangan Supergroup metasediments which are covered by a thin veneer of Kalahari sands.  The Sentinel, open pit, Copper Mine is operated by First Quantum Minerals some 130 kilometres to the northeast of the Pangeni Copper Exploration Project.  A number of major international mining companies have identified this region of the Zambian Copperbelt to be prospective for the discovery of tier one copper mines and are conducting exploration field work in this region.

BeMetals is a new base metal mining company focused on becoming a significant base metal producer through the acquisition of quality exploration, development and production stage base metals projects. Our growth strategy is led by a strong Board of Directors, key members of which have an extensive, proven track record in delivering considerable value in the mining sector through the discovery, construction and operation of mines around the world. The Board, its Advisors, and senior management also provide outstanding deal flow of projects to BeMetals based upon their extensive network of contacts in international minerals business.

Neither the TSX Venture Exchange nor its Regulation Services Provider (as that term is defined in the policies of the TSX
Venture Exchange) accepts responsibility for the adequacy or accuracy of this release.

This news release contains "forward-looking statements" and “forward looking information” (as defined under applicable securities laws), based on management’s best estimates, assumptions and current expectations. Such statements include but are not limited to, statements with respect to the plans for future exploration and development of the Pangeni Project and the acquisition of additional base metal projects.  Generally, these forward-looking statements can be identified by the use of forward-looking terminology such as "expects", "expected", "budgeted", "forecasts" , "anticipates" "plans", "anticipates", "believes", "intends", "estimates", "projects", "aims", "potential", "goal", "objective", "prospective", and similar expressions, or that events or conditions "will", "would", "may", "can", "could" or "should" occur.  These statements should not be read as guarantees of future performance or results.  Such statements involve known and unknown risks, uncertainties and other factors that may cause actual results, performance or achievements to be materially different from those expressed or implied by such statements, including but not limited to: risks related to the Pangeni Project; risks related to international operations; risks related to general economic conditions, actual results of current exploration activities, unanticipated reclamation expenses; changes in project parameters as plans continue to be refined; fluctuations in prices of metals including copper and other base metals; fluctuations in foreign currency exchange rates, increases in market prices of mining consumables, possible variations in resource estimates, grade or recovery rates; failure of plant, equipment or processes to operate as anticipated; accidents, labour disputes, title disputes, claims and limitations on insurance coverage and other risks of the mining industry; delays in the completion of exploration, development or construction activities, changes in national and local government regulation of mining operations, tax rules and regulations, and political and economic developments in countries in which the Company operates. Although the Company has attempted to identify important factors that could cause actual results to differ materially from those contained in forward-looking statements, there may be other factors that cause results not to be as anticipated, estimated or intended. There can be no assurance that such statements will prove to be accurate, as actual results and future events could differ materially from those anticipated in such statements. The forward-looking statements and forward looking information are made as of the date hereof and are qualified in their entirety by this cautionary statement.  The Company disclaims any obligation to revise or update any such factors or to publicly announce the result of any revisions to any forward-looking statements or forward looking information contained herein to reflect future results, events or developments, except as require by law. Accordingly, readers should not place undue reliance on forward-looking statements and information. Please refer to the Company’s most recent filings under its profile at www.sedar.com for further information respecting the risks affecting the Company and its business.