VANCOUVER, CANADA - BeMetals Corp. (TSXV: BMET) (“BeMetals” or the “Company”) is pleased to announce the commencement of BeMetals’ initial core drilling program at the Pangeni Copper Exploration Project (“Pangeni Project” or the “Project”), located on the western extension of the Central African Copperbelt in Zambia (the “Zambian Copperbelt”). This program will comprise approximately six shallow core boreholes totaling some 1,400 metres of drilling to test three high-priority targets. The Pangeni Project exploration licence totals 575km2 in an area where the prospective extensions to the Zambian Copperbelt are covered by a thin veneer of Kalahari sands. See Figure 1 for property location.

John Wilton, President and CEO of BeMetals, commented, “We are excited to be conducting our initial core drilling program at the Pangeni Project this field season. This region of the Zambian Copperbelt has seen very little historical exploration but last year’s aircore programs were very successful in generating three compelling targets.  Based on our 2018 aircore results, and a limited amount of core drilling (1,000m) by Antofagasta Minerals in 2016, we believe this round of core drilling will confirm the prospectivity of this Project to deliver, potentially tier one scale, copper discoveries through the identification of copper sulphide mineralization and associated alteration systems.

In 2018, BeMetals completed two phases of aircore drilling which totalled some 3,600 metres in 113 boreholes on the Pangeni property. Figure 2 below shows the range of copper values returned from both phases of aircore drilling, plotted on a geological interpretation map based upon high resolution aeromagnetic data acquired over the property. Importantly the modelled thickness of Kalahari cover units and interpreted bed rock geology from the aeromagnetic data were ground-truthed by the results of the aircore drilling. This exploration methodology utilising cost effective aircore drilling provided efficient money-in-the-ground focused deployment of funds.

The Company has just commenced core drilling at the Project and expects to complete approximately two holes at each target.  A single drill rig is being used for the drilling program and the initial drilling results are expected to be released late in the third quarter of 2019.  Further updates will be reported as the drilling program progresses and future programs will be determined after the Company has collected and reviewed all the data from this year’s drilling campaign. 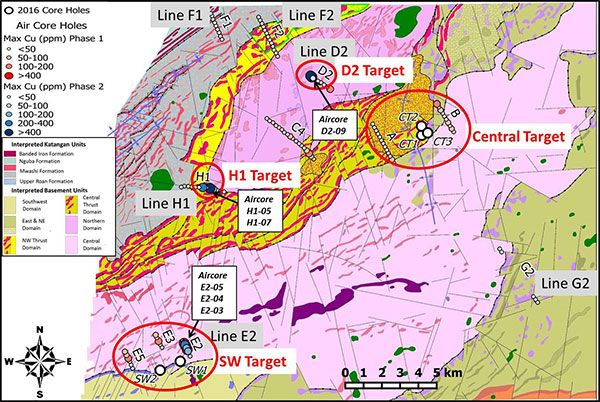 The results reported here for the D2, H1 and E2 targets were analyzed by an independent laboratory, Intertek Genalysis of Australia. These results were determined using multi-acid, near total digest, and analysed by Inductively Coupled Plasma (“ICP”) Optical (Atomic) Emission Spectrometry (“OES”). They compare favourably with the initial pXRF results and support the vigorous sampling protocol implemented for the field operations.

The Pangeni Project is located on the western extension of the Zambian Copperbelt, within the Lufilian Arc, underlain by Katangan Supergroup metasediments situated unconformably on basement schists and gneisses, which are covered by a thin veneer of Kalahari sands. The open pit Sentinel Copper Mine is operated by First Quantum Minerals Ltd. some 130 kilometres to the northeast of the Pangeni Project. A number of major international mining companies have identified this region of the Zambian Copperbelt to be prospective for the discovery of tier one copper mines and are also conducting extensive exploration  work in this area.

BeMetals' founding Directors include Clive Johnson, Roger Richer, Tom Garagan and John Wilton. BeMetals is a new base metals exploration and development company focused on becoming a significant base metal producer through the acquisition of quality exploration, development and potentially production stage base metals projects. The Company is advancing both its early stage, tier one targeted, Pangeni Copper Exploration Project in Zambia, and its advanced high-grade, zinc-silver polymetallic underground exploration at the South Mountain Project in Idaho, USA. The Company’s growth strategy is led by a strong Board, key members of which have an extensive proven record of accomplishment in delivering considerable value in the mining sector through the discovery, construction and operation of mines around the world. The Board, its Advisors, and senior management also provide outstanding deal flow of projects to BeMetals based upon their extensive network of contacts in the international minerals business.

This news release contains "forward-looking statements" and “forward looking information” (as defined under applicable securities laws), based on management’s best estimates, assumptions and current expectations. Such statements include but are not limited to, statements with respect to future exploration and development of the Pangeni Project and the South Mountain Project, as well as plans for the identification and acquisition of additional base metal projects. Although the Company has attempted to identify important factors that could cause actual results to differ materially from those contained in forward-looking statements, there may be other factors that cause results not to be as anticipated, estimated or intended. These statements should not be read as guarantees of future performance or results. There can be no assurance that such statements will prove to be accurate, as actual results and future events could differ materially from those anticipated in such statements. Such statements involve known and unknown risks, uncertainties and other factors that may cause actual results, performance or achievements to be materially different from those expressed or implied by such statements. Important factors that could cause actual results to differ materially from expectations include, without limitation, the actual results of exploration activities, the availability of financing and/or cash flow to fund the current and future plans and expenditures, the ability of the Company to satisfy the conditions of the option agreements for the South Mountain Project and/or the Pangeni Project, and changes in the world commodity markets or equity markets. Please refer to the Company’s most recent filings under its profile at www.sedar.com for further information respecting the risks affecting the Company and its business. The forward-looking statements and forward looking information are made as of the date hereof and are qualified in their entirety by this cautionary statement.  The Company disclaims any obligation to revise or update any such factors or to publicly announce the result of any revisions to any forward-looking statements or forward looking information contained herein to reflect future results, events or developments, except as require by law. Accordingly, readers should not place undue reliance on forward-looking statements and information.