The Pangeni Copper Project is located on the western extension of the Zambian Copperbelt, within the Lufilian Arc, underlain by Katangan Supergroup metasediments which are largely covered by a thin veneer of Kalahari sands on this property. The Sentinel, open pit, Copper Mine is operated by First Quantum Minerals some 130 kilometres to the northeast of the Pangeni Copper Project. A number of other major international mining companies have identified this region of the Zambian Copperbelt to be prospective for the discovery of tier one copper mines and are conducting exploration field work.

In April, 2018 a 43-101 compliant Independent Technical Report was completed by African Mining Consultants (“AMC”) for BeMetals for the Pangeni Copper Project. Click here to view the Technical Report.

The Property is located in the boundaries of large-scale exploration licence 19310-HQ-LEL (“Licence”) in the Manyinga District of North-Western Province, Republic of Zambia. The Property is approximately 255km west of the established mining centre of Solwezi. The town of Solwezi is adjacent to the Kansanshi copper mine and smelter. The approximate centre of the licence occurs at a latitude of 12º43’S and a longitude of 24º00’E and is accessible from Solwezi by the T5 or M8 tarred highways and secondary paved and gravel roads. 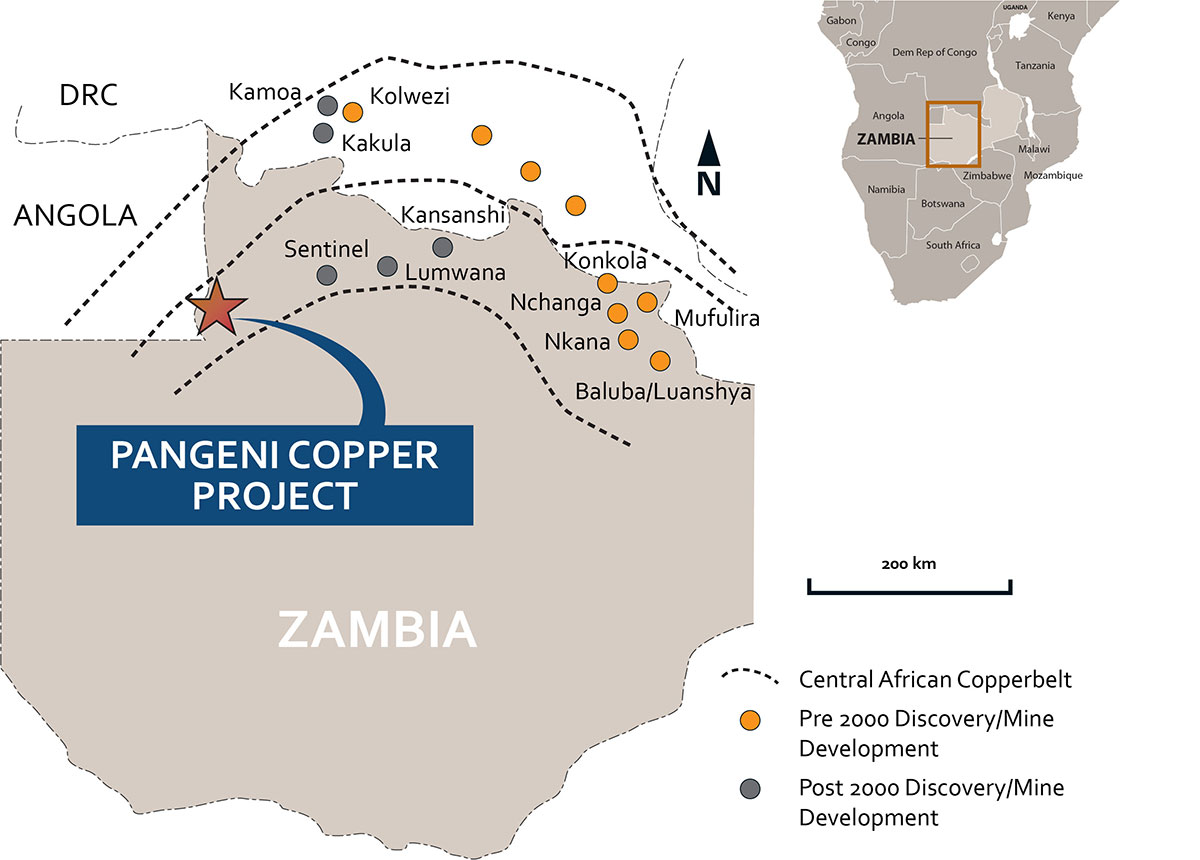 The Property totals 575.68km2. Pangeni Mineral Resources Limited (“PMRL”) is the 100% owner of the licence 19310-HQ-LEL issued by the Ministry of Mines and Minerals Development, Zambia. PMRL entered into an Earn-In Agreement with Copper Cross Zambia (“CCZ”). The terms of this agreement provide for CCZ to earn rights to 90% interest in the Property. BeMetals has secured the rights to earn a 72% interest in the Property through a binding letter, earn-in and option agreement with CCZ.

Through these rights BeMetals can initially acquire a 67.5% interest in the Property over a five-year period by expending US$2.5 million on exploration, incurring cash payments of US$1.45 million and issuing 500,000 shares, and delivering a preliminary economic assessment for the project. Following acquisition of the initial 67.5% interest, BeMetals can acquire an additional 4.5% (aggregate 72%) interest by completing a feasibility study and making a further cash payment of US$750,000.

The Property is geologically prospective for the deposit types listed below:

The mineralisation, identified within the Property to date, is characteristic of basement-hosted copper mineralisation in Zambia. Typically, it occurs in strongly foliated, locally mylonitic, quartz-biotite-muscovite-scapolite (±kyanite) schists.

BeMetals is advancing its exploration of the Property through the drilling of aircore boreholes to test, under the Kalahari cover units, for copper anomalies as potential extensions to the previously drilled mineralization, and other initial currently unexplored targets. The Kalahari Group typically consists of un- to semi-consolidated quartzitic sands that are aeolian deposits younger than Miocene in age.

Very little previous exploration had been conducted on the Property prior to 2014. Geochemical anomalies were first identified by Roan Selection Trust between 1958-64. Exploration programs since 2015 have included a fixed-wing airborne magnetic geophysical survey, regional geological mapping to support geophysical interpretations, and surface geochemical sampling. Recent exploration programs have identified eleven (11) priority exploration targets. Two of these targets (Central and South West) are more advanced and have been drill tested with a limited number of boreholes to date. Targeting using both geochemical and geophysical datasets, and criteria derived from models of deposit formation in Zambian Copperbelt, culminated in exploration drilling towards the end of 2016. Five core drill holes were drilled by Blurock Mining Services, Kitwe, Zambia, and completed under the supervision of Remote Exploration Services (Pty) Ltd. A total of only 1,000m of core drilling has been completed on the property to date.

Boreholes intersected copper mineralisation at the Central and South West Targets, providing encouraging proof of concept for the geological models generated for the Property. The results of the exploration to date support the strategy for further exploration on the Property.